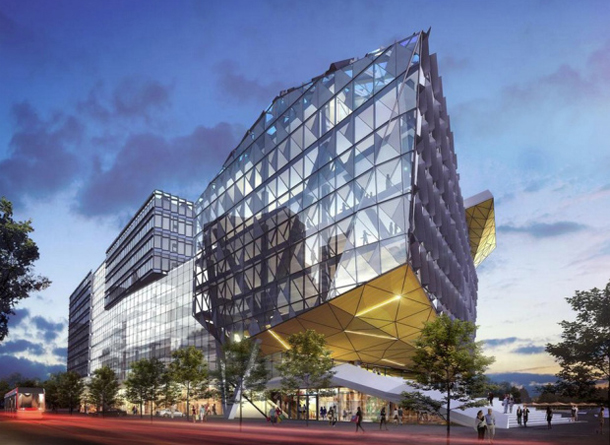 Something big is being proposed for Toronto’s Waterfront: The Innovation Centre, a nine-storey, 350,000 square foot mixed use building. The land it would be built on (between Sugar Beach and the Corus building) is now public, but it would be sold to Menkes Developments, which would be responsible for construction and would not be using any public funds.

One artist’s rendition has a streetcar running in front of the building. John Tory says, “ Obviously it’s a priority for us to have transit to the east waterfront and we are in the midst of currently sorting out where that is going to fit on the city’s priority list and how it is going to be funded.’’

Construction is expected to begin in 2016, once Menkes has found an anchor tenant. They are hoping the space will attract tech companies, with one of the selling features being the fibre-optic internet that’s part of the Waterfront redevelopment.

Big projects like this often get mired down in red tape and never see the light of day, but because this is being privately funded, it has a better chance of actually coming to fruition.