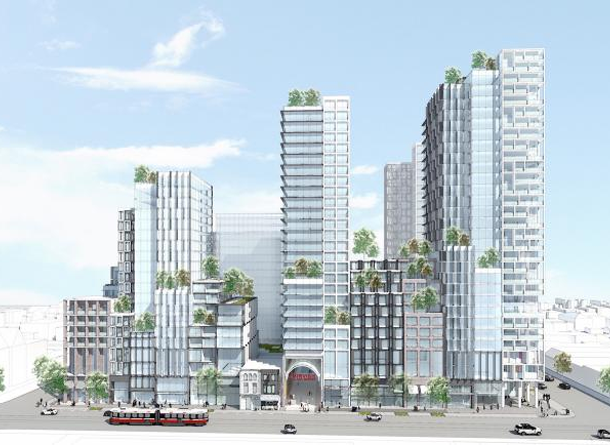 Plans for redeveloping Honest Ed’s continue to progress.  While losing a landmark like Honest Ed’s will be painful, with its proximity to transit, parks, shops, schools and restaurants, the intersection of Bathurst and Bloor is just too valuable to have a discount store taking up so much real estate.

UrbanToronto recently published the updated plans from Westlake, the company who will be creating some fantastic new spaces, “transforming the area into a mixed-use neighbourhood comprised of residential rental units, fine-grained retail, heritage buildings, a public market, and a significantly improved public realm.”

I wrote about the original plans in March, but here are some of the changes made after public consultation:

– Some of the buildings are being set back further from the street
– There are still three residential towers planned, including almost 1000 rental units and some of the heights have been increased
– Signage has been toned down

According to the post, some members of the Design Review Panel “questioned the integrity of many of the historic buildings included, as well as the demolition of others.

As well, “at a Toronto Preservation Board meeting in September, a recommendation was put forward to add 35 properties in the Bloor-Bathurst area to the Toronto Heritage Roster as listed heritage buildings.” This will be an important consideration because  as the plan stands, some of those buildings would be torn down.