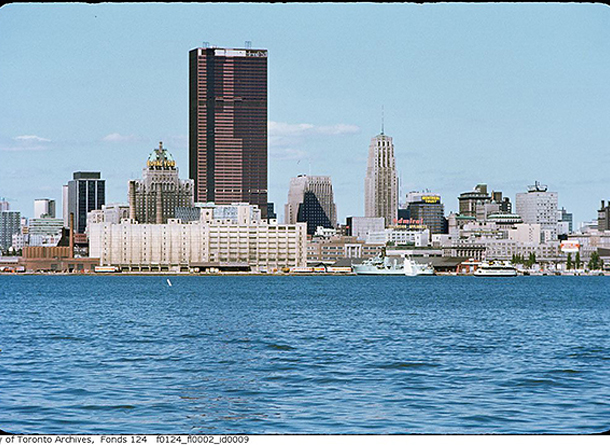 If you had to choose just one building that defines Toronto as a city, which would you choose? Some obvious ones include new City Hall, the CN Tower, maybe the Royal York? However, when the London Guardian chose theirs for our city, they picked … Honest Ed’s.

“Once dubbed ‘the world’s biggest discount shop’, Ed Mirvish’s extraordinary retail creation played a key role in Toronto’s development – but that won’t save it from demolition next year,” says the Guardian. You can read the full article here.

A recent piece in Spacing magazine looks into this decision and one writer’s pick for an alternate choice:  the Mies van der Rohe designed TD Centre. According to the article, it was created when the Bank of Toronto and the Dominion Bank merged in 1955 and they needed new office space.

A number of proposals were put forward, but “unsatisfied…Phyllis Lambert, adviser on the architectural review for the T-D complex, helped to bring in the famous German-American architect to design something special.”

Part of why this defines Toronto is that the year of the bank merger, Toronto elected its first non-Protestant Mayor, Nathan Phillips, who was a supporter of the new City Hall.

It’s an interesting read. Click here for the full piece.