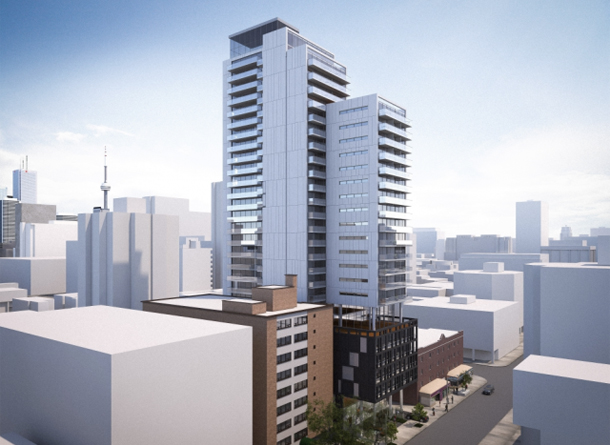 Toronto Real Estate: Growth to watch for in the Church Street Corridor

Anybody who has been near the village lately is seeing a lot of change – some buildings under construction, some signs for proposed development and some underused land.

In a few years when all this construction is finished (assuming that it will be finished), the village will be virtually unrecognizable. Not all of it is bad – surely there are better and more attractive uses for land than surface parking lots and beer stores. And some of the architecture looks to be interesting.

UrbanToronto has published a great article on what’s happening in the Church Street corridor and here are some of the highlights (and the lowlights):

Lowlight: 66 Isabella, which is currently under construction and should be completed by mid-2015. It is being constructed in what was a shaded green space. While it will have some much needed rental apartments, it’s a shame to lose that space.

Lowlight: 81 Wellesley Street East, where Aragon Properties is proposing a 28 storey tower. That space is now empty after an old building (which was waiting for a heritage designation) was demolished. The original building can still be seen on Google Maps

Highlight: 70 Carlton Street. While it would be a loss to the village for Zipperz to close, the building that’s proposed is pretty spectacular and would replace the building and surface lot. Hopefully it can be designed so that it doesn’t overwhelm the patio at Hair of the Dog.

Although there have been reports since 2011 that the Beer Store property (just north of Wellesley, east side) has been sold, there’s more noise now. Sandwiched between some low rise shops (none of which look historical) and Progress Place, it would be a tight space to build unless the developer is buying land on either side of it.

Ryerson has pitched a 32 storey student residents at 418 Church Street, in the parking lot behind what used to be The Barn, but this hasn’t yet been approved.