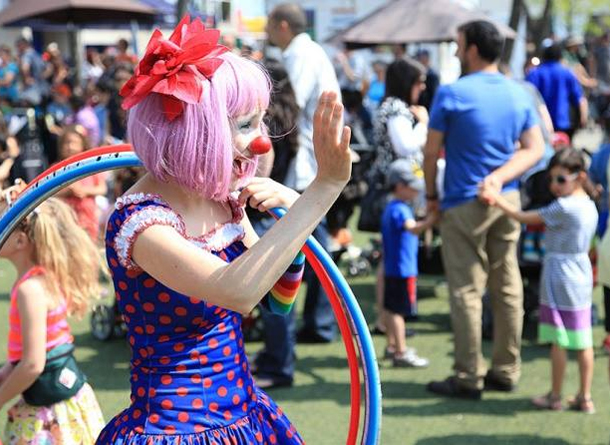 Now in its 33rd year, Canadian Music Week (CMW) is recognized as one of the premier music conferences and festivals in North America.

On buildings, billboards, and subway platforms or in major museums and galleries, the images in this year’s Festival  transform the experience of the city. Painterly or sculptural, abstract or representational, still or moving, ephemeral or enduring, each of them are innovations of photography, regardless of whether they were captured by a camera, cut from a magazine, output by a computer, exposed under the sun, or printed in a darkroom. Throughout the month of May in Toronto, CONTACT has no boundaries.

Every May, Cabbagetown residents gather at Wellesley Park to celebrate the official welcoming of Spring. This year is no different, and the Cabbagetown Residents Association is pleased to be hosting the 44th annual Forsythia Festival on Sunday May 3, 2015.

At Digifest, you can expect to watch engaging performances, learn from top innovators and be part of a savvy and dynamic audience. From architects to app designers, creators and entrepreneurs take centre stage to share their stories and showcase the digital and technological discoveries that will re-shape some of today’s pressing urban challenges.

The Toronto Comic Arts Festival celebrates the comics medium through a multifaceted event featuring book signings, author readings and presentations, book sales, panel discussions, and gallery shows. It is staffed by a group of volunteers interested in promoting the literary and artistic merits of comic books and graphic novels.

The age old tradition of CIRCUS is alive and well at Harbourfront Centre. Experience the thrills and delights of the best in circus at the Toronto International Circus Festival. Expect breath-taking acrobats, side-splitting comedy & jaw-dropping daredevils stunts!

The 16th annual Doors Open Toronto presented by Great Gulf returns on Saturday, May 23 and Sunday, May 24, offering free and rare access to more than 155 architecturally, historically, culturally and socially significant buildings across the city.

SING! The Toronto Vocal Arts Festival is Toronto’s first-ever a cappella festival, dedicated to celebrating Canadian and International vocal artists, and joined in collaboration by the same goal: to illustrate that the voice knows no limits – knows no constraints of genre, language or cultural background; to inspire and educate today’s youth; and to foster a new and revitalized patronage for the vocal arts.

Since inception, desiFEST has expanded to include Toronto, Montreal, Ottawa and Vancouver. We have also showcased artists from across Canada, UK, US, India, and Pakistan. We take pride in showcasing Canadian talent in the core of our city at Yonge-Dundas Square. We have helped over 300 artists and bands to gain exposure, collaborate on new music and strengthen the community.

MEC Bikefest is a celebration of all things bikes. Kick off the cycling season with bike demos, clinics, group rides, kids activities, bike retailers, cycling advocacy groups, tune ups and much much more!  Come join us and make it the best bicycle bash in Toronto.