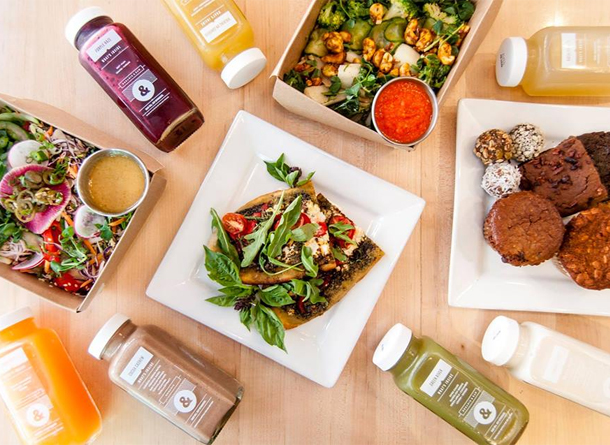 Foodies around Toronto look forward to the seasonal city-wide dining promotions like Summerlicious and Winterlicious, where restaurants offer special prices on prix fix menus or dining experiences. For the 6th year, Veggielicious will take place in collaboration with plant-based restaurants around the city, as well as hosting the event’s first ever pop-up on May 7th at Artscape Sandbox. The vegetarian and vegan communities in Toronto are growing rapidly, with an array of new eateries and stores popping up every week, ensuring that this year’s Veggielicious will be the most robust and diverse one yet.

Spring has finally come to Toronto, and Goodlife Fitness provides a great way to get out and enjoy the weather with their annual marathon. This year, there will be a number of races taking place, including half-marathons, 10K runs, 5K runs, and relay events. The Princess Margaret Cancer Foundation will be holding their Run or Walk to Conquer Cancer event at the same time in support of genetics-based cancer research.

Paddle the Don
May 7

If marathons aren’t quite your speed, Manulife Financial and Toronto and Region Conservation will be holding Paddle The Don on the 7th as well. One of the city’s most treasured watersheds, the Don Valley is a top destination for hiking, picnics, cycling, and other outdoor activities. Registration for the paddle is $100, which goes towards protection and regeneration programs for the park. The route begins at Ernest Thompson Seton Park to the mouth of the river at the Keating Channel.

Parkdale is one of the neighbourhoods that helps to give Toronto its truly unique character and reputation as a hotbed for creative collaboration. On May 13th, the annual Parkdale Sidewalk Festival will bring together all of the best things that PK has to offer: music, food, shopping, artwork, and interactive activities will be featured as well as the all-new Foodora Night Market. Sample some authentic Tibetan momos or pick up a new Toronto’s Finest cell phone case while you get to know the charming and characteristic locals!

The Toronto Comic arts festival “exists to promote the breadth and diversity of comics, and what is considered comics, as a legitimate medium of literary and artistic worth.” The event will be hosted at the Reference library as well as some surrounding venues, and will feature comic artists from around the world. There will be readings, interviews, panels, workshops, gallery shows, art installations and more.

Toronto Festival of Beer
May 20

Promising “great brews, tasty food, and cottage vibes,” the spring session of the Toronto Beer Festival acts as a preview for the main event in the summer. On May 20th and 21st (also knows as May Two Four Weekend) sample some of Toronto’s best craft beers like High Park Brewery or Barrie’s Flying Monkeys brew. There will also be a wide array of food trucks and local Toronto cuisine as well as live bands.

Toronto isn’t exactly by the seaside, and good seafood can be hard to find and expensive in the city. The Lobster Clam Jam, which takes place in Toronto and Montreal, aims to bring quality seafood and authentic Canadian dishes while giving back to the community – a percentage of all proceeds from the festival will go to the Starlight Children’s Foundation as well as the Sick Kids Foundation.

Also this Victoria Day Weekend is another one of the Distillery Districts famous craft marketplaces: the Distillery ArtFest! Whatever you’re looking for, or even if you’re not looking for anything in particular, the ArtFest is sure to have something that catches your eye. Some of the categories of goods are: leather art, jewellery, wood crafts, pottery, clothing, photography, home décor, gourmet food, glass art, sculpture, furniture, and more.

Gallery 1313 is having its annual fundraiser with the help of 16 designers who are putting together the Fashion Fantasy Show – a showcase of fashion combined with other artistic media.. The participants “occasionally incorporate performance and create wear that pushes the envelope on fashion and occasionally gives artists an opportunity to delve into fashion that has something to say and is quite often unpredictable.” Past performances have incorporated live snakes, outfits made of licorice, body painting, recycled materials, coffee filters and much more.

Japanese manga and anime are increasingly popular in the Western world, with millions of fans worldwide who cosplay as characters and have fan-held conventions. Anime North is one of the biggest not-for-profit fan-held events, with artists, voice actors, writers, exhibitors, and lots of cosplayers. There will also be a charity auction in support of Sick Kids!