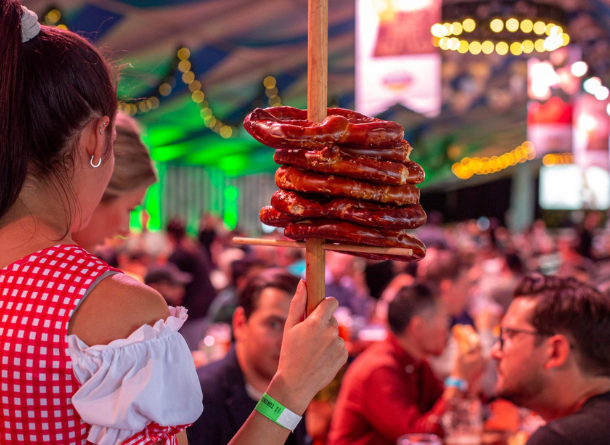 Founded in 2017 as a not-for-profit organization, Elevate produced its inaugural tech and innovation festival. This year, the reimagined festival unites icons and innovators at the intersection of arts and technology. Hosting the festival in Toronto, once again, Elevate will shine a light on the tech icons who dream big, the innovative minds who take great risks, and the fearless creatives who envision a future that includes us all.

Established in 2012 and now in its tenth year, Just For Laughs TORONTO is a pass-based interactive comedy festival in Toronto created by the Just For Laughs Group, the most important player in the global comedy industry co-owned by Groupe CH, Bell Media and ICM Partners. Developed with a mandate to celebrate the most hilarious, innovative, riveting and relevant comedy experiences in the world with Toronto audiences, Just For Laughs TORONTO’s unique interactive pass-based ticketing and reservation system makes it the first comedy festival of its kind.

The Toronto International Festival of Authors (TIFA) is Canada’s largest and longest-running literary festival, presented with a vision to inspire, empower and connect through the art of stories.

In 2022, the 43rd Edition of the Toronto International Festival of Authors will take place live and in person at Toronto’s Harbourfront Centre, with additional online offerings to complement the programme. Building on the potential of the Festival’s location, in particular the outdoor spaces, TIFA will enhance the experience for audiences and authors, opening up new creative opportunities to develop the Festival programme and activities.

The Queen West Art Crawl (QWAC) is a charitable corporation that drives a number of initiatives publicly benefiting artists and residents of Toronto through art, music, and multiculturalism, including a two-day multidisciplinary arts festival stretching along Queen Street West from Bathurst to Roncesvalles in Trinity Bellwoods Park in September of each year.

The long-running Queen West Art Crawl festival is happy to be back in Trinity Bellwoods Park this year (September 24-25).  We have also added a 6-day online component to create a unique platform for our artists (September 19-25).

Young and old, modern and traditional – it all blends harmoniously in a relaxed and welcoming atmosphere at Toronto’s Oktoberfest! This two day festival takes place in a massive Festhalle tent and outdoor Bavarian Village. Free German glass beer steins to the first 500 attendees per session. Bavarian communal tables and benches direct from Germany.

Forever Fest is about bringing people back together — the Canadian way! Happening rain or shine, we are excited to introduce an all-Canadian cultural event, that reunites local folks through taste, sound, and education all in support of Legacy of Hope. In fact, 100% of NET proceeds raised at Forever Fest are being donated to the charity. This fun-filled, 3-day event will highlight all-Canadian food + drinks + music.

Enjoy Some Amazing Concerts Throughout Toronto

We may be in the final stretch of summer, but the season of outdoor concerts and music festivals is still going strong. Major artists are taking the stage this month, from Lil Nas X to Post Malone to Elton John, not to mention the incredible headliners at Toronto’s first-ever Rolling Loud festival.

With only a small amount of time left before the warm weather leaves us and we get the gorgeous colours of Fall, enjoy a getaway with some of these end of summer road trips.

If you just want to stay home and curl up with a blanket, enjoy all of these latest movies and tv shows that have arrived on Netflix Canada in September.