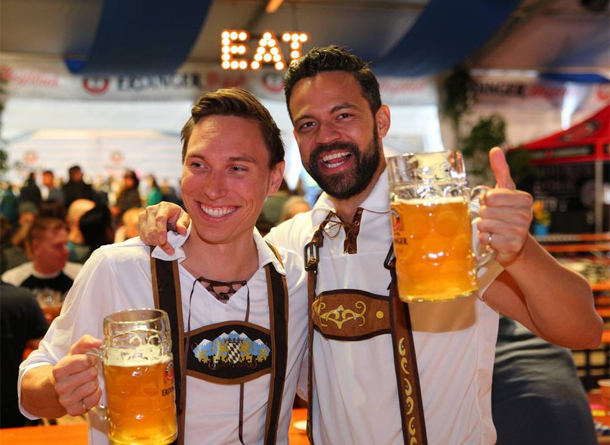 Toronto Events for September 2018: From Oktoberfest to TIFF

The biggest and brightest public film festival on the planet takes over Toronto each September with world premieres, cutting-edge film, galas and industry schmoozes. Whether you’re a cinephile or just love to see the celebs, Toronto during TIFF is the place to be.

Mark your calendars! The third annual Kensington Market Jazz Festival will be the best one yet. Deemed by Brad Wheeler of The Globe and Mail as “wildly successful,” the new kid on the Toronto jazz festival block is the brainchild of founding director, acclaimed musician, philanthropist and Officer of the Order of Canada, Molly Johnson. Born in Kensington Market, she dreamt of creating this festival for years as inspired by playing European festivals.

Open Streets programs, also known as Ciclovias, open streets to people and close them to cars encouraging participation in physical activity and healthy recreation. They are free, regularly occurring programs, and offer communities the opportunity to experience their city streets in a whole new way.

Are you ready for some serious laughs? Toronto’s Comedy Festival is back for another year of gut-busting events! On September 20, 2018, JFL42 returns to Toronto and promises to deliver the comedic goods.

Elevate is a city-wide tech and innovation festival centered in North America’s fastest growing tech ecosystem. An essential destination for global professionals, tech leaders, investors, and creatives, the event features inspiring keynotes, topical content streams, experiential programming, and epic socials. Join us September 21-27, 2018 in Toronto to be a part of a diverse and inclusive community at the forefront of innovation.

Join us at Toronto’s Festival on the beach – Woodbine Beach! Bring your flip flops and shades! Over 40 vendors bringing you some fun in the sun!

Dig out your lederhosen and dirndls! Inspired by traditions started in Munich, Germany over 200 years ago, Toronto Oktoberfest brings a taste of Munich to the city as it captures the essence of Bavarian festivities through authentic food, drink and merriment.

Is your space lacking style? Do you feel cramped and wish you had more room to breathe? Well then, it’s time to shape your space with the Toronto Fall Home Show! With more than 300 exhibitors, come and find what you need to restyle, restructure and reorganize your living space.

Colourful, thought-provoking and dramatic, the 13th edition of Nuit Blanche explores the theme, “You Are Here.” For the first time, the event extends into Scarborough to highlight its booming arts scene. Projects will focus on relevant issues such as social change and cultural endurance