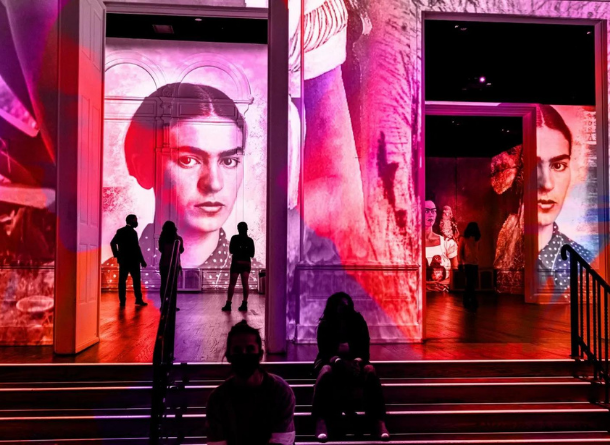 Toronto Events for March 2022: Real Life Events Are Back!

Experience live music in a new light with a series of intimate candlelit concerts in one of Toronto’s most magical locations, Casa Loma. Candlelight Symphony at the Castle features the Casa Loma Symphony Orchestra, under the artistic direction and baton of Maestro Paolo Busato. Guests will travel the 800ft tunnel below Austin Terrace, to the Carriage Room, for a one-of-a-kind performance bathed in candlelight.

The program on Thursday and Sunday evenings will feature A Night at the Movies with classic scores from some of Hollywood’s most memorable films including Star Wars, The Godfather and The Mission to name a few. Friday and Saturday evenings guests will experience From Broadway to Opera featuring music from Tosca, Turandot and Madame Butterfly to Phantom of the Opera, West Side Story, and more Broadway favourites.

Toronto Comicon is a spectacular three-day Sci-Fi, Horror, Anime, and Gaming event in Canada that attracts thousands of people to come to the Metro Toronto Convention Centre.

Everyone is a fan of something, and Toronto Comicon is a place to celebrate all things pop culture. Get an autograph or a photo with your favourite Guest then get the inside scoop about your favourite movies and TV shows at our celebrity panels! Watch professional comic artists battle it out in our popular Sketch Duels, learn from our “How To” workshops, and take photos with your favourite costumed characters! It’s also a great place to buy a unique gift (or treat yourself!) with a huge show floor for the ultimate shopping experience.

Toronto’s beloved street parades could finally be returning this spring, starting with the annual St. Patrick’s Day Parade. Organizers have announced that this year’s parade will take place on Sunday, March 20th, if Ontario’s reopening plan continues to move forward.

Described as “the largest Irish event in Canada,” Toronto’s St. Patrick’s Day Parade is an event that the city has looked forward to every year. It was among the first to get cancelled when the pandemic began and was called off once again in 2021.

With an unrelenting dedication to Canadian voices, we exclusively showcase work from the nation’s filmmakers – both homegrown talent and newcomers alike – whether they’re telling stories that take place within our borders or around the world. With our series of Industry talks and panels, everyone gathers at the festival once a year to share their knowledge and talk about what’s next. There’s no shortage of filmmaking talent in Canada and we’ve made it our mission to prove that.

The “main event” is the annual Toronto Sketch Comedy Festival each March which features 12 hilarious days of the best live, scripted comedy in North America and beyond. Founded in 2005 by a group of Toronto comedians the festival has since grown by leaps and bounds, and is a highlight in the Toronto comedy calendar.

We are very excited as we return for the in-person One Of A Kind Spring Show from March 30 to April 3, 2022, at the Enercare Centre, Exhibition Place.

Spring is often associated with rejuvenation, reinvention, growth and new beginnings. Keeping that in mind, we are delighted to introduce the theme for our Spring Show: Flourish.

Join us to get inspired, set your creative intentions and connect with yourself while you explore a diverse world of craft by a local community of creators. Don’t miss your chance to discover the power of creativity, to celebrate meaningful bonds and to appreciate the strength of our passion as we set the stage to flourish again!

Explore the world through the eyes of the legendary Frida Kahlo – a brilliant, uncompromising painter who created some of the history’s most iconic artwork. The groundbreaking team behind the smash hit Immersive Van Gogh now turn their eye for innovation towards the work of a woman who boldly told the story of her life in brushstrokes.

As you stroll through the Lighthouse Immersive gallery, you will see the Mexico-born artist’s work come to life on a grand scale and discover the people, events, and obstacles that made her the extraordinary woman she was.  The mesmerizing, large-scale projections, accompanied by a ravishing musical score, will sweep you up as you encounter Frida as never before.

Robert Lepage – The Library At Night

The Library at Night is an immersive and sensory virtual-reality journey that whisks you away to ten libraries, real or imagined, throughout time and across the globe – from Mexico to Japan, Copenhagen, Sarajevo and beyond.

Libraries are monuments of knowledge and ideas, and as the guardians of books they contain worlds within worlds. But what happens when the doors close and the lights go out? What lingers at the edges of what is known and understood?

At The Library at Night, you can unravel the mysteries for yourself. This virtual experience created by Robert Lepage and inspired by Alberto Manguel’s book of the same name immerses you in the wonder and whimsy of iconic and mythical libraries throughout history.

ArtworxTO: Toronto’s Year of Public Art 2021–2022 is a year-long celebration of Toronto’s exceptional public art collection and the creative community behind it. This exciting new initiative supports artists and art projects that reflect Toronto’s diversity and creates more opportunities for the public to engage with art in their everyday lives.

The arts sector is an essential component of a vibrant community and plays a key role in the city’s economic recovery from the pandemic. Working closely with artists and Toronto’s arts institutions the City of Toronto is delivering major public art projects and commissions from fall 2021 to fall 2022. This year, explore your city and discover creativity and community–everywhere.

Coming to Netflix in March

Catch up on the latest film and tv shows making their way to Netflix Canada in March.