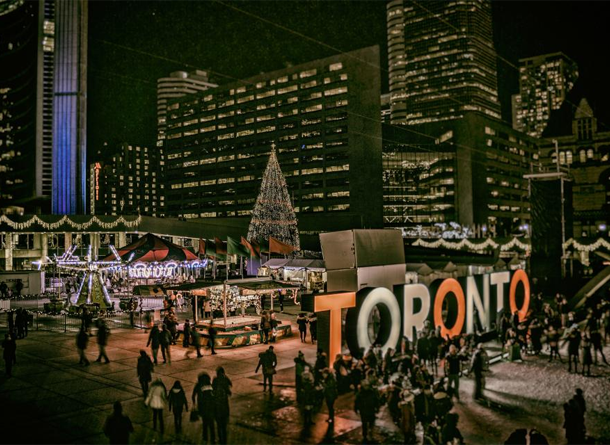 Inspired by the Old World and influenced by the New, this is month-long event celebrates the sounds, sights and scents of Christmas. Set in the Victorian-era, cobblestone-lined Distillery Historic District, the Christmas Market brings together local craftspeople, musicians and artisanal food-makers for a truly festive experience. Sip on mulled wine and European Christmas cocktails as you peruse the selection of hand-made ornaments, wood carvings and crafts. Then cozy up by the fire or take in carollers, brass bands and authentic European dancers.

Holiday Fair In The Square: December 1 to December 23

In the heart of Toronto at Nathan Phillips Square, the Holiday Fair in the Square runs December 1st – 23rd. Combining the charm and elegance of a Christmas market with the excitement and allure of a thriving winter carnival, Fair in the Square is a new favourite Toronto holiday tradition.

The 2018 iHeartRadio Jingle Ball returns to the Scotiabank Arena in Toronto on December 2nd!

A Christmas Carol: December 7 to December 24

Soulpepper’s beloved production of A Christmas Carol has become a Toronto holiday tradition. Follow Ebenezer Scrooge as he is visited by three ghosts who help him understand the importance of charity in the holiday season.

Happy to be back at the Polish Combatants Hall for the third time!

The Nutcracker: December 8 to December 30

James Kudelka’s ravishing and gloriously re-imagined version of the evergreen Christmas spectacular was created for The National Ballet of Canada in 1995 and it remains an unparalleled holiday entertainment for both children and adults. Replete with Kudelka’s signature dynamic and exuberant choreography and gliding with wonderful ease from whimsical and often boisterous comedy to breathtaking spectacle and touching emotion, the ballet is a feast for both the senses and the imagination.

The Naughty Listers: December 15 to December 31

A hilarious holiday musical for all ages! The North Pole is thrown into chaos when one of Santa’s most trusted elves goes rogue. To get the holidays back on track, Santa will need the help of some of the naughtiest children ever. The Second City is proud to present The Naughty Listers – a hilarious mix of puppets, live action, and song that all members of the family will enjoy. Even the naughty ones.

By Order of The Phoenix all Toronto Witches & Wizards are cordially invited to celebrate a Magical Evening at The Phoenix Concert Theatre on Thursday the 20th of December. We are delighted to host this years Yule Ball for all magical beings in Toronto.

Dress robes and all things magical are encouraged for this formal Yule Ball magic & dance event. Pupils will be entertained throughout the night with musical performances as we transform our venue into a magical wonderland.

T’was three nights before Christmas, when all through the hotel every brewery was pouring, the music was swell; The steins were filled by the breweries with care, In hopes that dancing and karaoke would soon be there;

The drinkers were nestled all snug in their sweaters, While visions of ales and sours made them feel better; All the 19+ kids in town squealed with delight, The Gladstone Hotel’s providing our favourite night cap!