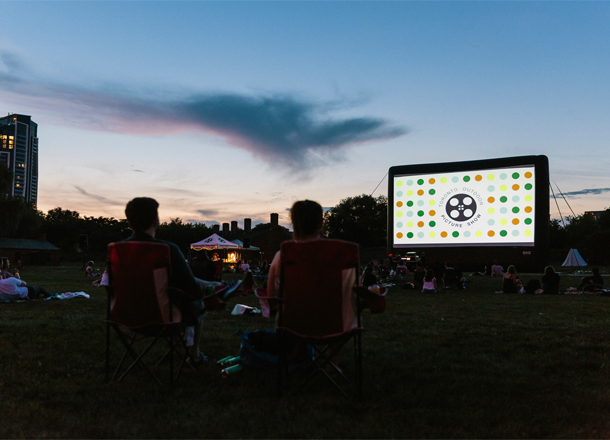 Box Concerts are joyful live performances that come to you. Our pop-up stage is traveling around the City of Toronto this summer, bringing music to your doorstep.

Safely share in a magical experience with friends, family and loved ones, and fall back in love with much-missed live performances.

A 30-minute performance by leading talent, presented on a travelling stage that comes to you. Suitable for the whole family, and available for residences in the City of Toronto.

Welcome to SummerWorks Festival 2021— free, public-facing programming across multiple platforms throughout the month of August.

Starting August 1, each day will offer new ways of encountering artists and their work, either in person or through digital formats. Through the month, you will be invited to witness online public sharings, engage with artists through social media, as well as explorations of public access to artistic process, from performance in storefront windows to communal walks through the park.

With a desire to invest in the artists shaping the future, this year’s Festival focuses on work in development, nurturing artistic exploration as we begin the process of rebuilding.

As the lights change at a major crossroads in a city in the heart of Europe a car grinds to a halt. Its driver can drive no more. Suddenly, without warning or cause, he has gone blind. Within hours it is clear that this is a blindness like no other. This blindness is infectious. Within days an epidemic of blindness has spread through the city. The government tries to quarantine the contagion by herding the newly blind people into an empty asylum. But their attempts are futile. The city is in panic.

Award-winning playwright Simon Stephens (The Curious Incident of the Dog in the Night-time, for which he won both the Tony and Olivier awards for best play) has adapted Nobel Prize-winner José Saramago’s dystopian novel Blindness.

JerkFest is North America’s oldest Jerk Food & Music Festival and has consistently been voted one of Ontario’s top 100 Festivals since 2011.

A staple in Toronto for the past two decades, the festival will be celebrating it’s 20th anniversary this year!

Last year there were in excess of 80k virtual attendees and we expect to match or surpass that number this year for the virtual event taking place August 6-8, 2021.

A new immersive open-air experience with 40,000 sq ft of colourful candy-inspired installations is coming to Square One Shopping Centre. You’ll get to walk among larger-than-life candy art displays which will provide you with tons of Insta pic opportunities. Additionally, you can watch live performances, custom parade floats, and even bring your pup for the event’s dog-friendly days!

BMO IFFSA Toronto is the largest South Asian Film Festival in North America, and a pioneer organization devoted to advancing the development, promotion and celebration of  cinematic arts. IFFSA is a year-round platform with various sub-festivals and initiatives, which culminates in BMO IFFSA Toronto Fortnight each May. In its 10th year now, the festival has become an international icon and the voice of South Asian cinema in Canada.

This extravaganza showcases a diverse, language independent, selection of the best films from around the world, on themes of South Asian cultures and identities. A select number of foreign films are considered under Beyond South Asia segment.

The TD Toronto Jazz Festival Summer Concert Series is a weekly concert series, broadcasting live from the Long & McQuade Performance Hall at JAZZ.FM91, which kicks off our 35th anniversary celebrations, culminating in the 35th edition of the TD Toronto Jazz Festival in June, 2022. Presented by TD, the Summer Concert Series highlights 10 local acts who each bring their own unique perspective to the performance of jazz, and reflect a variety of the elements which have been part of the Festival over the past 35 years: from emerging artists and young lions to the best of the best; from traditional jazz to new sounds; from mentorship to community connections.

A day full of the best in Canadian thoroughbred racing, great fashion, amazing food and loads of fun!

Catch Up On the Latest Netflix Offerings

August is soon upon us, and with it are lots of new and exciting movies and TV shows headed for Netflix Canada. Get ready for a brand new month of your favourite movies and tv shows.