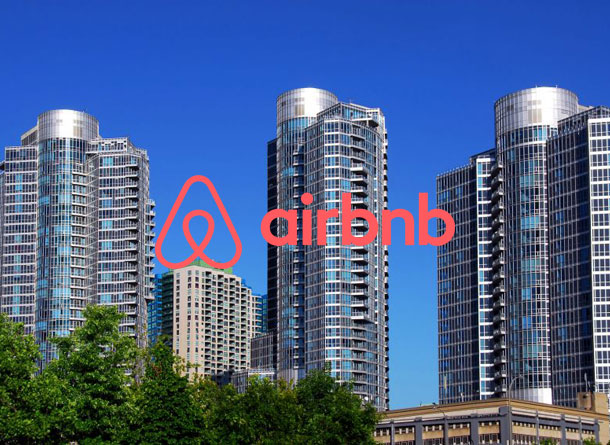 Can you guess which company is quickly becoming the largest hotelier in the world? If you guessed Airbnb, then you’re right… and they don’t even own any hotels!!

Airbnb has been in the news A LOT over the past few years because they’re successfully disrupting the hotel industry. Cities around the world are scrambling to develop different methods of dealing with the idea of locals renting out their condos and thereby creating a shortage of rental properties. In fact, Toronto is experiencing its lowest vacancy rate in 16 years. Now, whether that is due to condo owners taking advantage of short-term rentals or simply a shortage of units being built is up for debate, as the numbers aren’t 100% clear as to how many condos on the market are being used exclusively for Airbnb.

So, it was surprising to many when news broke of a condo corporation on Fort York that has partnered with Airbnb to allow owners to rent out their suites. It’s possible that the buildings, at 209-215 Fort York Boulevard, already had a large percentage of units being rented out, but this is a major shift for a condo corporation. Most buildings don’t allow short-term rentals (shorter than six months) for a number of reasons.

Many corporations want to know exactly who’s in the units and this means that each occupant needs to be registered. Constantly registering new tenants puts extra stress and strain on the concierge desk and management. When you think about it, when dealing with short-term rentals, there’s a higher chance that more keys and security fobs are going to be floating around as well as there being more wear and tear on the amenities. The truth is, monitoring the tenants is a challenge and requires way more manpower than is usually budgeted for. There is also the issue of dealing with residents who don’t want to be living a building with transient guests. Frankly, if I bought a unit in a condo building with the expectation of it being my principal residence, I wouldn’t want it to be a hotel – unless, of course, it was the Shangri-La. I could totally live there!

To give you an idea of how this is affecting people, Radio City recently had an online vote with all residents and owners asking if they were open to short-term home-share Airbnb-type arrangements within the buildings. The result was a resounding NO.

One owner at Radio City is fighting back. He owns a two-bedroom unit and wants to be able to rent out the second bedroom on a short-term basis. His stance is that, if he’s living there and monitoring the short-term tenant then he should be able to rent his room to whomever he chooses for as long as he chooses. As a result (and last I heard), he and the condo corporation are in the process of arbitration because the resident doesn’t feel the vote was done correctly for fairly. It seems to me that hosting someone in a spare bedroom is different than renting out your entire suite, but board rules can’t cover or monitor all situations. It’s hard to have a grey area with the short-term rental rule because who’s to say the owner is always going to be there? His suite would have to be monitored to make sure he’s not just using it as a hotel and that’s an unreasonable and costly expectation for the corporation. Unfortunately, the rules must be strict especially when maintenance costs are a prime consideration in our budget conscious society.

The motivation to rent out a unit as a short-term rental is crystal clear – in a yearly lease situation, you might be able to charge a tenant $2000 a month, but with hotel prices as high as they are, you could charge $300 a night for a condo and even if it’s just booked 30% of the time, you’re making $3000. I was speaking with an Airbnb owner that other day and he told me his booking rate was 96%; can you imagine who quickly you’d pay off your mortgage?? Of course, there are extra expenses such as the Airbnb fees but they don’t eat up much of the profit.

If you’re considering buying a condo with the goal of renting it out on Airbnb, you have to do your research. There are particular buildings which allow short-term rentals and have the staff and systems in place to manage it. Some of the buildings include 300 Front Street, 20 John Street, 20 Blue Jays Way, 560 Front Street East along with a handful of others. You also need to take into account re-sale value. You may want to buy a large condo so you can charge more, but it may be slightly more difficult to sell it compared to other primary residences. Sometimes a building that allows short-term rentals focuses on a narrower niche buyer market because there are fewer people who wish to invest into a “short term rental building”. The buyer would most likely be another investor and not someone who was looking to live there. Of course, investors are always looking for a deal as opposed to someone looking for their ideal home who might be willing to pay more because they fell in love with it.

You also don’t want to run afoul of the condo board rules which, by the way, can easily change during the currency of your ownership. According to Toronto real estate lawyer Lisa Laredo, if you breach a condo’s rules and by-laws, their first step is to issue a cease and desist order. If you breach the order, you can be arrested and go to jail. Ultimately, if you resist repeatedly, the condo can require and enforce a sale of your property. And you’d be liable for all legal fees.

If you’re considering a rental property, whether for a long-term tenant or short-term, please get in touch. I’m happy to answer any questions!