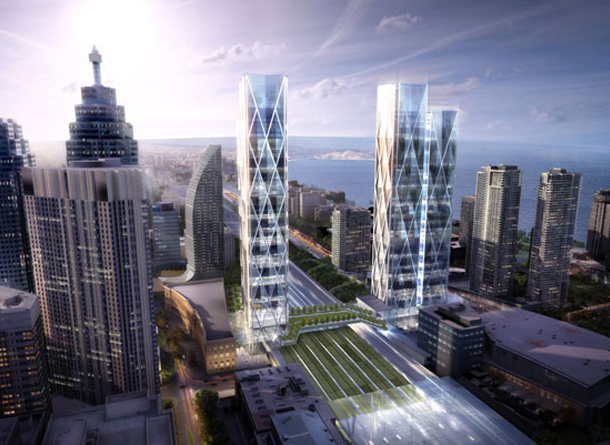 Toronto’s downtown core is set to get another large number of condos, but there’s also some office space being proposed. If you think the skyline is changing quickly now, just wait until 2025!

Not all of the ten tallest buildings are new construction, but included in the top ten could be The One at Yonge and Bloor, the Mirvish Gehry buildings on King West, 1-7 Yonge Street, 160 Front Street and 45 Bay Street.
One of the more interesting projects is at 45 Bay Street, which would cover eight acres and include a new GO bus terminal and a sky part over the rail corridor. The proposal also includes two office towers, which would bring some much needed new space to the core.

Not all the projects are a go as yet, especially The One. The Mirvish-Gehry buildings were approved this summer by city council, so expect to see a massive amount of construction at King and John once they break ground.