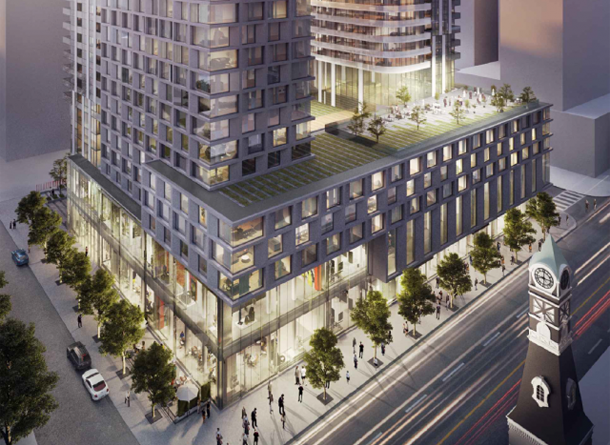 In more Toronto condo development news, it looks like big changes are coming to the intersection of Yonge and Wood.

The 66 storey YC Condos is currently under construction and earlier in March, the city of Toronto received an application to rezone the space where the Courtyard Marriott Hotel currently stands, with the hopes that the city will allow two towers, 45 and 65 storeys tall.

The full story, which you can find on Urbantoronto, is clear that this isn’t a final proposal, but an idea of what could end up there, which may be as many as 988 condo units plus 289 hotel rooms which would mean more than 2000 people between the two buildings plus tourists.

While the proposal includes retail at the base, it would take more than that to revitalize Wood Street which is effectively a dead zone, home to the rear end of Maple Leaf Gardens, multiple parking lots and the side of a few apartment buildings.

The main concern about projects like this is always density, but if not at an intersection like Yonge and College, then where? It’s right near the Alexander Street parkette (better hope not too many people have dogs!) and a couple of blocks from Allen Gardens, right by the Loblaws at Maple Leaf Gardens and steps from the subway. It looks like much of Yonge Street will experience growth like this over the next decade or so – let’s just hope that there is enough interest in the retail spots that the Yonge corridor retains its energy!