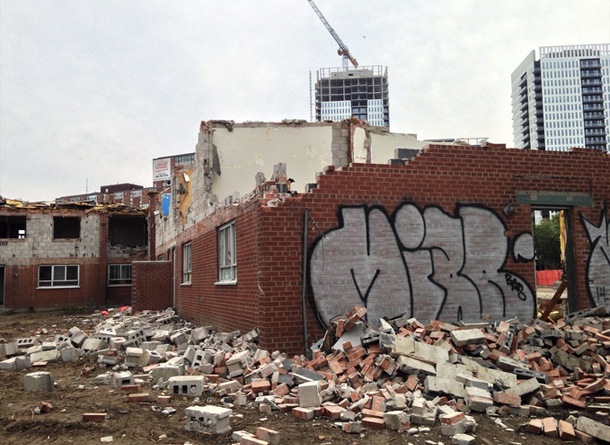 The Toronto condo building boom continues with the third phase of Regent Park beginning soon and involves demolition of some townhouses near Blevins and Shuter. According to UrbanToronto, those aging buildings will be replaced by “614 rent-geared-to-income units, approximately 50 new affordable rental units, and six new market condominiums.’

Phase two, which involves the aquatic centre and the new park that is opening on June 21st, is scheduled for completion in 2017.

Phase one was completed in 2012, and according to the CMHC: includes 670 market condominiums and 360 affordable rental units, for low to moderate income residents in a mix of townhouses and high-rise apartments. The mixed-use community features two daycares, community agency space, a learning centre, employment hub and over 2,500 m2 of retail and commercial services space, including a bank and a large grocery store.

The additions also include the Paintbox Bistro and a new theatre space, the Daniels Spectrum, which has hosted a number of terrific productions. If you’ve been by the area lately, you’ll notice how much better it looks and how businesses and residential units are integrated, as opposed to just the ugly housing that used to be there. Those who are moving in, both market value and community housing, will be able to take more pride in their home!