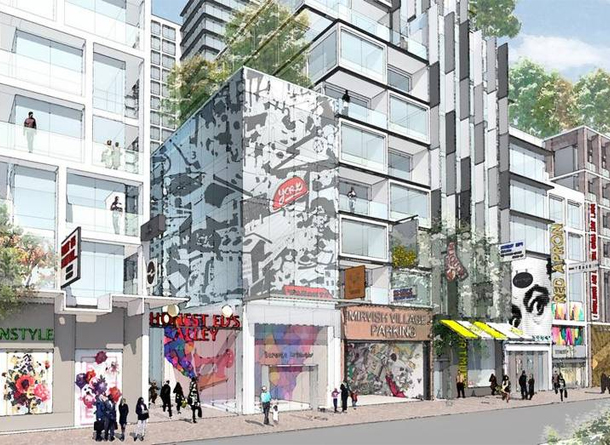 There was a bit of a shock when Westbank, the developer who owns Honest Ed’s, revealed their plans for the site at a public meeting recently.

The shock? None of the plans include condos.

They do include one thousand rental apartments, spaces that will house a number of retailers, so they’re not out of place in the neighbourhood, and also a permanent public market.

Alex Bozikovic, the Globe and Mail’s Architecture Critic, has written an informative piece about the announcement.

The proposal hasn’t been submitted to the city for approval yet, but as presented, it would be hard to find fault. The pitch includes patios, a day care, possible affordable housing and bike lanes, all integrated into a neighbourhood that is across the street from a subway station and already has much of the necessary infrastructure.

Oddly enough, while there is mention of an auto share program, there is no mention of how much parking will be built. One has to assume that if there is underground parking, it will be minimal and the entrance/exit will be on a side street and not feed out onto Bathurst or Bloor. Can you imagine? That being said, if you live at Bathurst and Bloor, even if you had a car, you probably wouldn’t be driving every day.

Only time will tell whether this plan comes to fruition – although because it is a private initiative, it has a good chance of succeeding. Keep watching this space for updates.