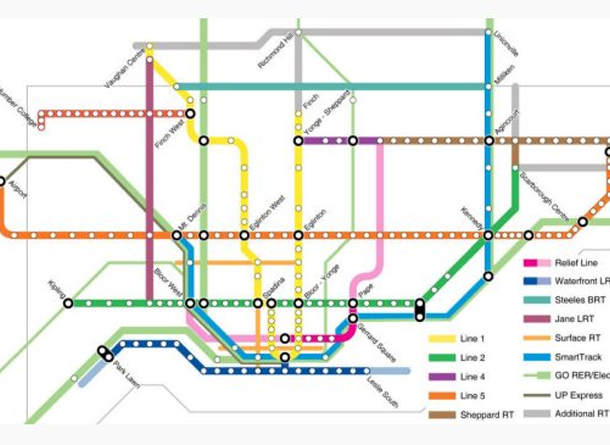 Stop me if you’ve heard this one before: The City of Toronto announces a grand plan for transit involving multiple lines and ultimately ends up being cancelled or looking like the Sheppard stump.

Sound familiar? It happened with Transit City when Ford took office in 2010 and the Eglinton subway was cancelled by the Harris government – after tunnelling had begun! That’s only in the past couple of decades. True, the Spadina subway line is being extended to Vaughan and the construction is well underway on the Eglinton LRT, but that doesn’t make up for 20 years of inactivity.

A new plan has been introduced with meetings scheduled for public input over the next few weeks that will go to city council in June. Remaining optimistic, there are a couple of things that are different this time around. One is Jennifer Keesmaat – she clearly has a vision and knows that planning one route at a time won’t do the job. As well, Prime Minister Justin Trudeau, Premier Kathleen Wynne and Mayor John Tory all appear to get along, which could make the process go a little more smoothly.

This piece from the Star explains the plans in more detail. As for the cost, the Globe estimates it could hit $10 billion.

How does this affect the real estate market and how are we going to pay for it? If you live near one of the new subway stops (or better yet, near where two lines cross), the value of your property will likely increase faster than a property further away from a subway station. As for paying, it could also result in a special transit tax or increased property taxes.This reduces the chance that Toronto’s Land Transfer Tax will be reduced or eliminated as it brings in approximately $500M annually.