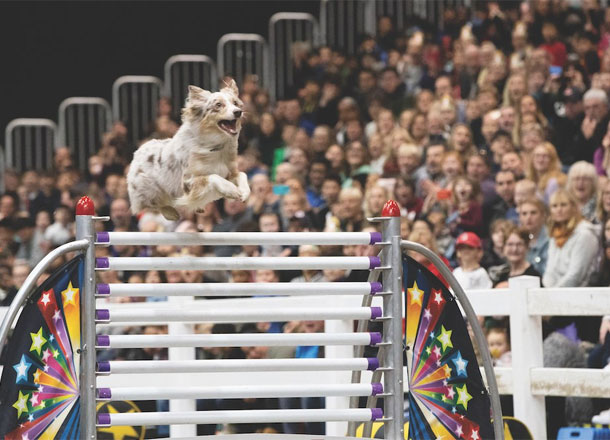 The Toronto Reel Asian International Film Festival® is a unique showcase of contemporary Asian cinema and work from the Asian diaspora. Works include films and videos by Asian-identifying artists in Canada, the U.S., Asia and all over the world. As Canada’s largest Asian film festival, Reel Asian® provides a public forum for Asian media artists and their work, and fuels the growing appreciation for Asian cinema in Canada.

In celebration of Canadian Tire’s 100th birthday, The Canadian Tire Christmas Trail is back to make this the Christmas of the century. The drive-along experience takes guests on an enchanted 1.5-kilometre journey through thousands of twinkling lights, interactive displays, and live entertainment featuring new and familiar faces. Guests will be immersed in the magic of Christmas and can capture their beloved annual photo with Santa in a memorable way, all from the comfort of their own vehicle.

The Distillery Historic District shops, restaurants and cafés, and the Distillery Winter Village displays and music are open seven days a week, starting at 10:00 am daily.

The Distillery Winter Village outdoor shopping cabins and food vendors will be open from noon, Tuesdays to Sundays. They will be closed on Mondays.

Miracle is a Christmas-themed pop-up cocktail bar that serves holiday cocktails in a festive setting. With kitschy holiday décor, cocktails by the team at Civil Liberties, and the nostalgic energy of the best office party you’ve ever been to. Miracle is sure to get even the grouchiest grinch in the holiday spirit.

An instant holiday tradition since coming to Toronto’s Queen St. in 2018, Miracle has popped-up at unique locations throughout the city. This year, Miracle will be popping-up at 875 Bloor St West, home of Third Place Toronto, at Bloor and Ossington, just steps away from Civil Liberties.

$1 of every drink sold is donated to Nellie’s Shelter.

Since 1905, the Santa Claus Parade has kicked off the Christmas season, first in Toronto, then for the whole country as it has grown in popularity and importance throughout the years. The Parade brings people together, regardless of their background, celebrating hope, family and love. It’s part of the fabric of our community.

Every year we bring hundreds of thousands of people on the streets of Toronto, and millions more watching at home, together to celebrate this joyous season. We’ve been doing so uninterrupted for 118 years, and that’s exactly what we will be doing again this year, bringing Santa’s magic to town.

​The Canadian Pacific (CP) Holiday Train will return to the rails this season on its first cross-continent tour in three years, following virtual concerts in the pandemic years of 2020 and 2021. The train will again raise money, food and awareness for local food banks in communities along the CP network.

The 2022 tour will launch on Nov. 23 with the Holiday Train’s first-ever Maine shows in Jackman, Brownville Junction and Hermon. Also for the first time, the Holiday Train will host shows on Nov. 24 in Lac-Megantic, Sherbrooke and Farnham, Que.; the first Canadian stops of 2022. The tour will feature 168 live shows, including Toronto on Nov. 29; Bensenville, Ill., on Dec. 2; Davenport, Iowa, on Dec. 3; Kansas City, Mo., on Dec. 4; Calgary on Dec. 11; and a final show in Port Coquitlam, B.C., on Dec. 18.

The One Of A Kind Show (November 24th-December 4th)

Rooted in our purpose to champion creativity, One Of A Kind brings together a community of like-minded individuals to exchange ideas, stories and objects through the culture of craft.

Cavalcade of Lights is an annual event that marks the official start to the holiday season in Toronto. Nathan Phillips Square comes to life with a glittering tree, ice skating and, of course, lights.

As the weather gets cooler, what better way to escape the cold than with a new film or tv show?