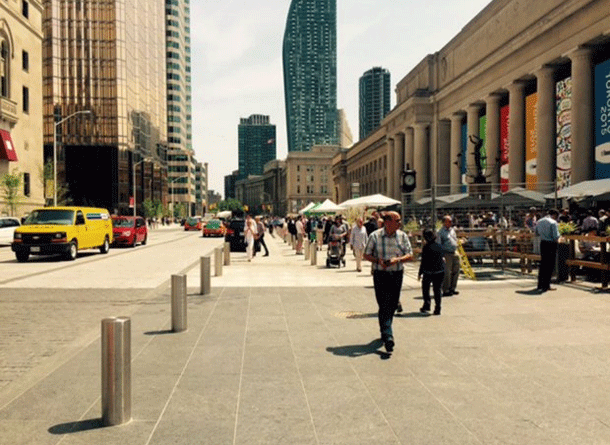 How Union Station went from ‘transportation tomb’ to destination

Here’s an interesting piece (complete with video!) from the Post’s Peter Kuitenbrower about what’s happening at Union Station.

Ostensibly it’s about the ability to buy a beer, but it really speaks to a larger issue – that Union Station has gone from a place you avoid (unless you were boarding a train) to a destination.

The Union Station Food Market appears to be a big success – it runs until the end of August, so you haven’t missed your chance to enjoy vegan ice cream (care of Wanna Banana), roasted corn, Uncle Tetsu’s cheesecake (with a much shorter lineup than the shop on Spadina) and much more.  There’s even a Toronto Public Library vending machine!

While there was construction outside the station for what felt like ages, the space was opened up before the Pan Am Games to reveal a beautifully cleaned up exterior.

The York Street GO concourse opened in April this year, adding 62,000 square feet and now the Bay Street concourse is now closed for two years while that gets renovated. It’s estimated that by 2020, Union Station will be able to handle double the number of trains that arrive now, which is important for increased GO service and the increase in the number of commuters into downtown Toronto.  It’s estimated that the new Bay concourse will open in 2017. Fingers crossed.