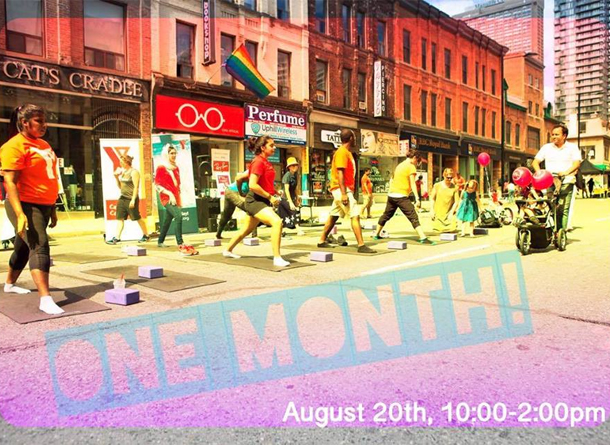 Events in Toronto for August 2017

Caribana actually spans a full weekend, but the event that most people show up for is the Grand Parade, where countless masqueraders, floats, and bands march along Lake Shore Boulevard. Famous for its feathered headdresses, Caribbean music, and general air of carelessness and celebration, the Caribana Parade always brings a unique energy and cultural experience to Toronto. There’s something for everyone, with everything from church services and nightclub parties to children’s carnivals and a CN tower light display show.

The Taste of India Festival is hosted by School of Flavours at Nathan Phillips Square and combines all aspects of preparing and enjoying Indian cuisine, with food stalls, cooking demonstrations, food competitions and cultural performances. The festival is designed to “centre around good food as the foundation for connectivity, economy growth, environmental sustainability, and good health.” The organizers promise a unique experience with the top South Asian chefs in the GTA alongside local performing artists.

The Great American Eclipse of 2017 begins on August 21st and will cover the entire continental United States for the first time in 99 years. The event is expected to be massive in the social media age, with viewing parties and lookout points being organized in anticipation. Canadians can expect about 70 per cent coverage. Some Ontario officials are concerned about a sharp drop in electricity, as the province depends on solar panels for much of its power, so it might be best to stock up on flashlights beforehand!

Taste of the Danforth is Canada’s biggest street festival, drawing in over 1.65 million attendees annually. This year will be special because the festival will be marking Canada 150 with a “Canadian Heroes” program that allows visitors to meet famous Canadian heroes in a virtual reality setting and take an interactive 360-degree photo. Of course, the event will stay true to its roots in Greek cuisine with hundreds of vendors selling everything from spanakopita to souvlaki – attendees are also invited to break plates in a “rage room” in the ancient Greek tradition.

The CNE is arguably one of the biggest and most eagerly anticipated events in Toronto. The Ex is well-known for its rides and food (think bacon tacos and churro cheeseburgers) but will also feature casinos, aerial circus shows, and even seminars with celebrity chefs such as Jamie Kennedy. There are endless shopping opportunities, with convention centers being turned into warehouse outlets, craft markets, and an “international pavilion” with vendors selling goods from around the world.

Camp Wavelength is a music-themed “day camp in the city” for adults. Usually held on the Toronto Island, this year’s festivities will take place in the city due to flooding. As well as performance artists and art installations, the two-day event also promises DIY video games, campfires, storytelling, a glitter station, a mask play, hidden dioramas, guided nature walks, and a “giant swan.” Beloved Toronto indie bands such as Dilly Dally, Germaphobes, and Ice Cream will be playing alongside an array of other Canadian musicians.

The Vegan movement continues to grow, with new restaurants and plant-based products popping up all the time. The touring Vegan Food Festival will be in Toronto on August 19th and will have an assortment of vendors selling 100% vegan food and drinks. If tempeh and kombucha aren’t quite your thing, don’t worry – there will be plenty of vegan takes on classics like the hamburger as well as an impressive array of vegan treats, from doughnuts to sundaes.

Many people may not know that North America has a Wild Blueberry Association, but this month the NAWBA will be hosting a two-day festival at Evergreen Brickworks celebrating everything about the fruit. Blueberry producers, preservers, bakers, and chefs will be featuring their blueberry products (such as Libretto’s blueberry pizza) in addition to other foods like sausages, Japanese mochi, tamales, wine, ice pops, and more. The recommended half cup of blueberries every day may not be feasible for some attendees, but live bands combined with delicious treats make for a truly special summer event.

The city’s largest free recreation program, Open Streets TO is all about bringing Torontonians together for some outdoor fun. Stretches of Yonge Street and Bloor Street downtown are closed to cars, and “Activity Hubs” set up at various points. Yoga classes, hopscotch, communal mural painting, and relay races are just a few of the things to do – the activities are all about “keeping people’s brains and minds active through arts, physical activity or cultural programming.”

The Urban Bike Challenge is a two-wheeled scavenger hunt across the city. Participants will decipher clues and hidden messages to find and photograph items and destinations that are unique to Toronto. For $25, explore the city and get to know new people by hunting for prizes and racing to the finish line. Proceeds go to Cycle Toronto, a not-for-profit organization that works to improves cycling safety and infrastructure in the city.