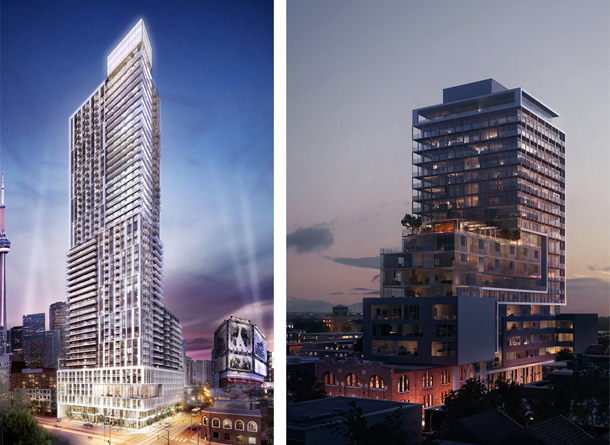 Eastside Toronto, or is that Downtown East, or “That area around Ryerson”? Whichever, it’s hot

The east side of Toronto’s core is going to be experiencing some big changes! Earlier this year I wrote about development happening east of Yonge… but there’s so much happening it deserves another look.

The National Post spoke with a number of developers and recently published an interesting piece on what’s happening in the neighbourhood which has yet to be named. The projects sound interesting and the good news is that at least one of the towers will be incorporating heritage buildings.

SigNature Communities is planning a building called East United which would be at Berkeley and Adelaide. The 21 storey building would keep the Christie Brown & Co. stables which were built in 1906.

CentreCourt Developments has a 47 storey tower planned for Dundas and Jarvis, Grid Condos.

According to the Post, “dozens of towers are already planned by the City or in approvals. That’s 13 in Downtown East (bounded by Carlton to Queen and Jarvis to Sherbourne streets); seven in the West Don Lands’ Pan/Parapan Am Games site; four near Queen and River Street; 13 in the St. Lawrence area south of King Street; 14 in Regent Park comprising market condos and assisted buildings, and three in North St. Jamestown (around Bloor and Sherbourne streets).”

Architect Ralph Giannone compares the east side to what King and Spadina was a decade ago – “a desolate place with “scorched earth” to today’s “fertile land with wonderful flowers blossoming that are condominiums and parks and restaurants and lots of people.”